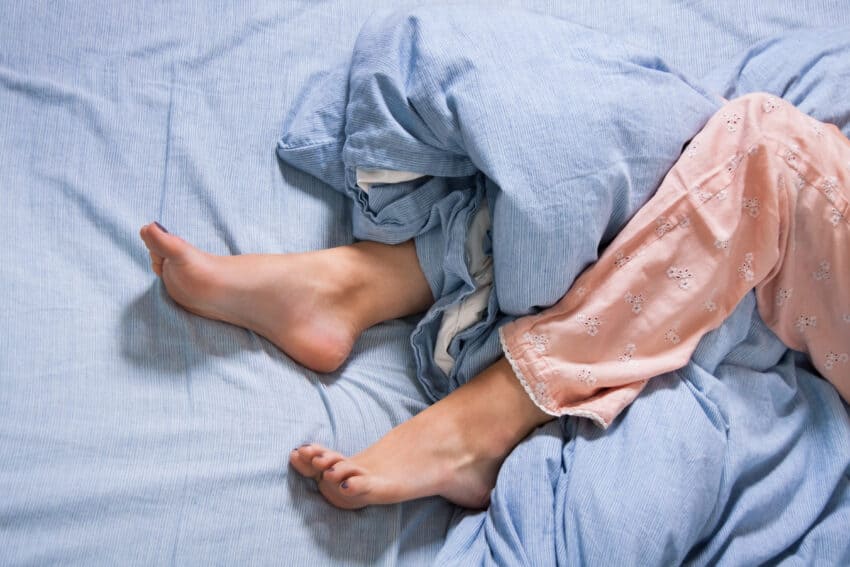 Widget not in any sidebars


How to sleep with restless legs at night isn’t easy. Tossing, squirming, fidgeting you may call it. If you’re struggling to go to sleep, but can’t seem to keep your legs still so you can fall asleep, you may have RLS, or restless legs syndrome. According to the National Institute of Neurological Disorders and Stroke, estimates of up to 7-10 percent of people in the U.S. may have this disorder. While the exact cause of restless legs syndrome is not clear, research is ongoing and there are some things you can do that may provide some relief to help you get to sleep at night.

What is restless leg syndrome

Also known as Willis-Ekbom Disease, RLS is a common sleep and neurological sensory disorder, occurring in women twice as often as in men. The chronic sleep disturbance related to restless leg syndrome comes from the circadian nature of the symptoms, as they are worse at night than during the day. It also has a higher rate of occurrence in people that have obstructive sleep apnea (OSA) as well, although, the association between RLS and OSA has seldom been reported. People who have RLS experience uncomfortable sensations in their legs resulting in an irresistible urge to move them.

Restless legs syndrome is among a number of disorders that can lead to daytime sleepiness and exhaustion due to the difficulty to go to sleep at night. Common to other disorders that can result in sleep deprivation are the inability to concentrate, complete normal daily tasks and memory problems affecting job or school performance, mood and even personal relationships. If left untreated RLS may also contribute to depression, anxiety and even cardiovascular issues due to cardio-metabolic dysfunction.

What are the symptoms of restless legs

The key symptom of restless leg syndrome is, as its name implies, the overwhelming need to move your legs. RLS may also affect your arms, but it is less common, and rarely your chest or head. Although difficult to define, people may describe a feeling like aching, throbbing, itching, or crawling and may range from uncomfortable to irritating or even painful. Symptoms often occur in the late afternoon or evening but are most persistent at night when you are at rest, such as sitting or lying in bed. Symptoms may also be experienced when you are sitting for extended periods of time. For example, you may be taking a long trip by car or plane. Do you have a desk job and sit for long periods of time until you can’t sit still? You get the idea.

Over 80 percent of people with RLS also report periodic limb movement of sleep or PLMS. It is recognized by twitching or jerking movements during sleep approximately 15 to 40 seconds apart, sometimes occurring all night. While many people with RLS may develop PLMS, the majority of people with PLMS to not experience RLS.

Trying to go to sleep or stay asleep with restless legs can be difficult because moving your legs or other affected area only temporarily relieves the discomfort. So you feel the need to constantly move your legs to reduce or eliminate the sensations. You may toss and turn in bed, get up and pace the floor or constantly need to move your legs while sitting. Symptoms may change in frequency and severity day to day and person to person from moderate to severe. Moderate cases, occurring only once or twice a week, may result in significant difficulty falling asleep causing some disruption of daytime ability to function. Severe cases experienced more than twice a week have greater impact on falling asleep and daytime impairment.

Although the cause of RLS in most cases is unknown, sometimes there are ties to other medical conditions such as iron deficiency, neuropathy, late-stage kidney disease, Parkinson’s disease and multiple sclerosis.

One part of the brain that controls movement, called the basal ganglia, uses the brain chemical dopamine which is needed for intentional and smooth control of muscle activity. Involuntary movements are often the result of disruption of these dopamine pathways. There is notable evidence suggesting a dysfunction in the basal ganglia using these pathways in people with RLS. People with Parkinson’s disease, another disorder affected by disrupted dopamine pathways are at increased risk of RLS.

Habits that may trigger or aggravate RLS symptoms can include:

How is restless leg syndrome diagnosed

To a large extent, your doctor will rely on how you describe your symptoms. What triggers them? How do you find relief? Do you have symptoms throughout the day? It will be important to know how often, how long, and how strong your symptoms last and if moving your legs eases symptoms. Is there any pain associated with your symptoms? You may be asked about the time it takes to fall asleep and any effects on daytime sleepiness, sleep disturbances or daytime functioning. He will also want to know about family history and any medications you take.

The doctor may perform a physical exam and a neurological exam. Laboratory testing may be done to check for other possible causes which may include kidney failure, iron deficiencies or pregnancy. It is not a requirement to RLS diagnosis but, in some cases you may be asked to take a sleep study, which usually involves an overnight visit, to monitor your sleep if your doctor thinks sleep apnea may be a part of the cause.

There are five key elements to diagnosing RLS:

Treating RLS – How to sleep with restless legs at night

Restless leg syndrome is treated with a combination of behavioral strategies and medication for many people. Sometimes treating an associated medical condition such as diabetes, iron deficiency, or obstructive sleep apnea can relieve RLS symptoms. Trials of different medications may be needed as no single drug controls the condition for everyone and they may lose effect or worsen symptoms over time and need changed.

Behavioral or lifestyle changes – These are things you can do yourself and can include:

Anti-seizure drugs are usually the first line of drugs for people with RLS. These can reduce the sensations of creeping and crawling as well as nerve pain and can include gabapentin enacarbil as well as the standard form of gabapentin and pregabalin. Side effects experienced may be dizziness, fatigue, or sleepiness.

Dopaminergic agents which increase the effect of dopamine are use in large part to treat Parkinson’s disease but have shown to improve RLS symptoms when taken at night. Approved drugs include ropinirole (Requip), pramipexole (Mirapex), and rotigotine (Neupro). Other drugs used intermittently are Levodopa or carbidopa. Nausea, dizziness, or other short-term side effects may be experiences with these drugs.

Opiods in very low doses may be given to RLS patients who respond well to the previous groups. Among these are methadone, codeine, hydrocodone, or oxycodone. You may experience nausea, constipation, dizziness and may increase conditions with sleep apnea.

Benzodiazepines are usually prescribed for the treatment of insomnia, anxiety and muscle spasms but may be prescribed to help you get more restful sleep. These are the drugs of last resort due to their side effects of sometimes causing daytime sleepiness, less energy and reduced ability to concentrate.

Pneumatic pressure therapy– compression devices may be used to increase blood flow to the legs. These inflate with air squeezing the legs and have shown to improve symptoms after one month of daily use.

Restless leg syndrome is generally a life-long condition for which there is no cure. But with present treatments available it can be controlled to minimize the symptoms and increase your amount of restful sleep. The creeping, the crawling, and irresistible urge making you toss and squirm at night can be relieved so you can go to sleep at night.

Symptoms may gradually worsen with age. Some people have remissions, periods in which symptoms decrease or disappear for days, weeks, or months, although symptoms may eventually reappear. RLS may not need to be treated at all if symptoms are mild, do not produce notable daytime discomfort, or do not affect your ability to fall asleep. But there is help when you need it.

This article is for informational and educational purposes only and does not constitute medical advice. You should seek the advice of a doctor if you need medical treatment. Read full disclosure here.

Where can I get more information

Thanks to the National Institute of Neurological Disorders and Stroke for much of the resource for this article.

1 thought on “How to sleep with restless legs at night”

This website may include affiliate links to products. This means if you click on it and make a purchase the vendor may pay me a commission at no extra cost to you.See full disclosure here.