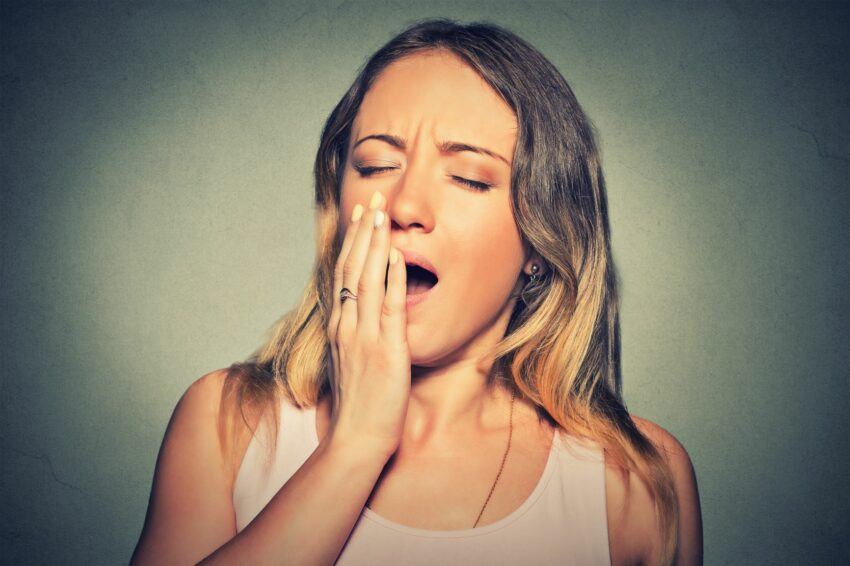 I passionately strive to gather information and resources that can help to get better sleep. This post may include links to products related to my content that may aid and give value toward that goal. This means if you click on it and make a purchase the vendor will pay me a commission at no extra cost to you. View my full disclosure here.

You probably didn’t wake up this morning asking yourself, “Do I have sleep apnea?” But, did you wake up still tired and with a headache? Is your day full of things that need done but you’re too tired and can’t find the energy to get through it? Did you sleep well last night? Have you been having problems with insomnia? Has your partner, perhaps, noticed irregularities in your breathing during the night? You could be experiencing sleep apnea and not realize it. When your a woman, you may go undiagnosed because symptoms of sleep apnea in women appear differently than in men. Why is that?

The symptoms and causes of sleep apnea fall into 3 types. The most common type being obstructive sleep apnea (OSA). It occurs when the upper airway completely or partially collapses repeatedly during sleep. This leads to lower blood oxygen levels and can cause you to awaken from sleep. OSA is measured by the number of times per hour the airway collapses, known as rate.

Most people are unaware that women have greater risk for sleep apnea as they get older. Although, it is 2-5 times more common in men, the risk for women increases after menopause. This increase may be due to changes that occur in the upper air way, but could also be due to the hormonal changes associated with menopause.

Symptoms of obstructive sleep apnea reported by women include:

Snoring may also be reported by women but it is less commonly mentioned than in men. Perhaps, because it is more likely for a woman to attend an appointment on her own and not have the input from her partner who would observe the snoring or other symptoms.

A less common type is central sleep apnea. This happens when the muscles that control your breathing don’t get the right signals from your brain. When the correct signal isn’t sent you pause, or lack respiratory drive, for a brief period. This may cause you to awaken short of breath or may prove difficult getting to sleep or staying asleep.

As I suffer from this type of sleep apnea myself, I would describe the way I feel it as feeling very exhausted and not having the strength to immediately draw a breath after I have exhaled. So I pause just a moment and “rest” before I draw air in. This is most prevalent in me during periods when I already feel very exhausted during my waking hours. Maybe I feel exhausted because I have the sleep apnea to begin with. It may not be a medical description but is how I perceive it in myself and it may be different for someone else.

You can also have complex sleep apnea. This is when central sleep apnea remains present after obstructive sleep apnea has been addressed through positive air way pressure which I will talk about shortly.

Why is Sleep Apnea Different for Women

Sleep apnea symptoms in men are reported far more often than in women because women are inclined to have less severe sleep apnea symptoms than men. The rate is fewer and the duration of each event shorter. Women may be less likely to report snoring than men who also report more apneic events and also may experience more fatigue, whereas, men will show more sleepiness during the day. Women can also exhibit more depression or anxiety, which is also more common in women than men without OSA. Finally, because sleep apnea has historically been regarded as a male disorder, we might not be looking for it as much in women. Correspondingly, fewer women may receive correct diagnosis and treatment.

Health Risks for Sleep Apnea – Not Only a Sleep Problem

While there are risks common to both sexes, women may be at an elevated risk of OSA during pregnancy because of a number of factors. Among them is the growing uterus raising the diaphragm and affecting how they breath. Documented substantial increases of snoring and gasping along with observed apneas have occurred in pregnant women. Snoring is considered to be a risk factor for pregnancy induced hypertension and lower growth rate for the baby.

Diagnosing sleep apnea is crucial to avoid the longer term negative impacts it can have. If left untreated, over time, the health risks for sleep apnea can include:

In addition, one study suggested that women were more likely to develop cognitive impairment or dementia.

Taking a Closer Look at Women and Sleep

Although, the occurrence and severity of obstructive sleep apnea in women appears to be less than in men, the effects and health consequences are equal at best, and perhaps worse. OSA is becoming more wide spread today. This is attributed partly to the rise in obesity and partly due to changes allowing for a broader definition of the disorder. This broader definition could help to diagnose and treat more women that may have not been considered before.

Even though your symptoms may not be as strong, or even appear to be exactly the same as those in men, it does not rule out sleep apnea. If, you suspect you could have sleep apnea you should ask your doctor. He or she will discuss your symptoms and may suggest a sleep study. With proper diagnosis you can be back on the path to the rest you need and feel yourself again.

2 thoughts on “Are Symptoms of Sleep Apnea in Women Different Than in Men?”

As I passionately strive to gather information and resources to get better sleep, this post may include links to products that may aid and give value toward that goal. This means if you click on it and make a purchase the vendor will pay me a commission at no extra cost to you. View my full disclosure here.